Summer recreational boating in the Juan De Fuca Strait is rewarding but can be quite rough at times, depending on a number of factors including location, wind, and currents.

The Strait’s summer conditions are heavily influenced by the narrow opening between the Olympic Mountains and Vancouver Island, the same topography responsible for the rain shadow in the winter. The features create very large tidal flows and thermally induced summer winds that frequently run to 30 Mph. Furthermore the bottom topography includes major shoal areas which further amplify wind and tidal effects.

The primary concern is short rough seas in the 3-6 foot range with steep waves that seem to come from all directions. In this blog post I’ll share some of my experiences and draw some conclusions about crossing the Strait of Juan De Fuca.

In general my crew of family, friends, and myself have found the Eastern and Central strait to be tricky water. These areas seem to have routinely the highest winds and roughest water in the summer. Hein Bank, which is approximately ½ way between Sequim and the San Juan Islands, some 12 miles from land in any direction, is a shoal area that rises from waters hundreds of feet deep to water to only about 30 feet deep. Luckily, the coast guard operates a buoy on Hein Bank which reports via the Internet, real time and historical wind, current, and wave data.

This buoy data is invaluable for excursions in the central and eastern strait. Before any attempt at crossing the Strait, boaters should consult this buoy for current and trailing 24 hour wind and wave data.

Here is a summary of my experience overall. All departures were early morning and/or timed with light winds.

My definition of a “bad trip”, no pun intended, is not a disastrous, nightmare, rather it is one through short high seas where I need to slow to 10 mph or less and adjust my route to “tack” into the seas and/or run with them; the boat bangs around, and you worry what would happen if you needed run on your trolling motor.

On two trips during the summer of 2011, I took an extensive look at tidal and wind conditions to determine what made the difference between a pleasant trip and a bad one. I’ll look at these two trips in some detail, and then draw some general conclusions, based on those and other trips.

Here is map of the area of that summer’s trips, with the two routes shown I’ll look at. 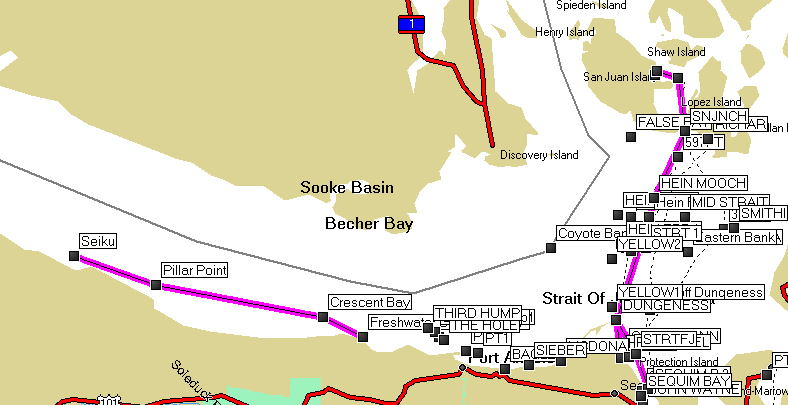 Here was the wind situation: 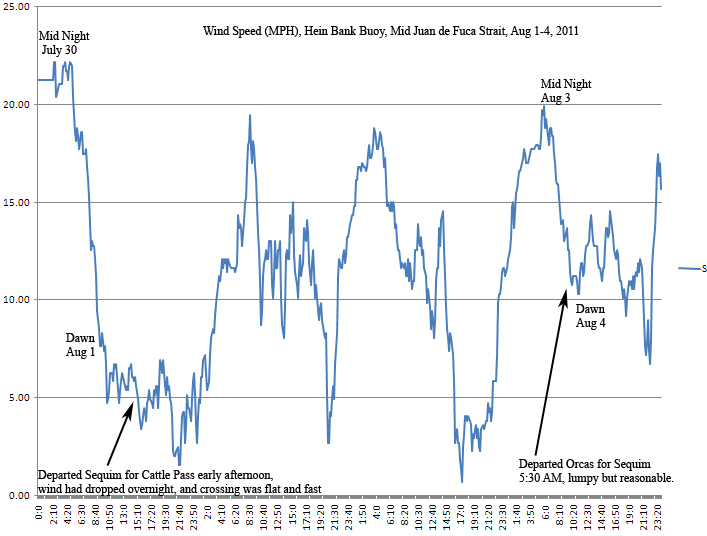 And the tide situation (this was a screen shot from my Garmin GPS chartplotting software. I think it is a good idea to print such a chart before you leave!): 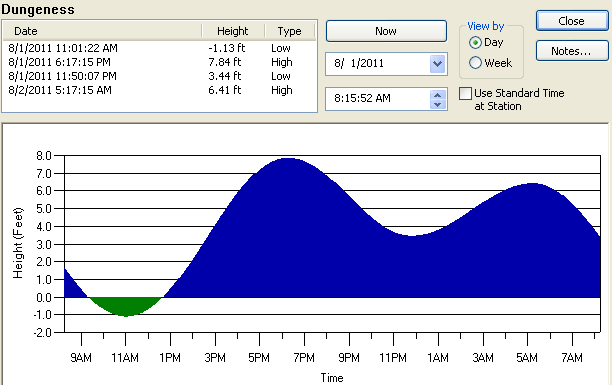 The above charts show two things clearly, there was a lot of tide flooding and there was a significant wind drops overnight before my trips, especially on August 1st.

In terms of boating conditions, the trip over on Aug 1 was flat water. While there was a large flood tide underway, the winds had died off from 20+ Mph the night before and continued to subside in the late morning to hover in the 5-7 Mph range during my crossing from 1-3PM.

The return from Orcas on Aug 4 was a bit bumpier, especially as I approached Hein Bank. However it was not bad, and the overall trip took me just 15 minutes longer that the trip over. The wind had dropped the night before from 20 Mph to roughly 10 Mph, and the tides were modest flood. I think the early morning departure helped, and getting across the strait before the winds got over 15 Mph also helped.

Trip 2, Port Angeles to Seiku with an overnight in Freshwater Bay. We departed Port Angeles mid day on Aug 26th, with flat water for the 10 odd miles westerly to Freshwater Bay. The next day, awaking to calm seas and clear skies, but with a fog bank to the east, we had a leisurely departure at about 9 AM, not expecting challenging conditions. Here was the wind situation in mid Strait: 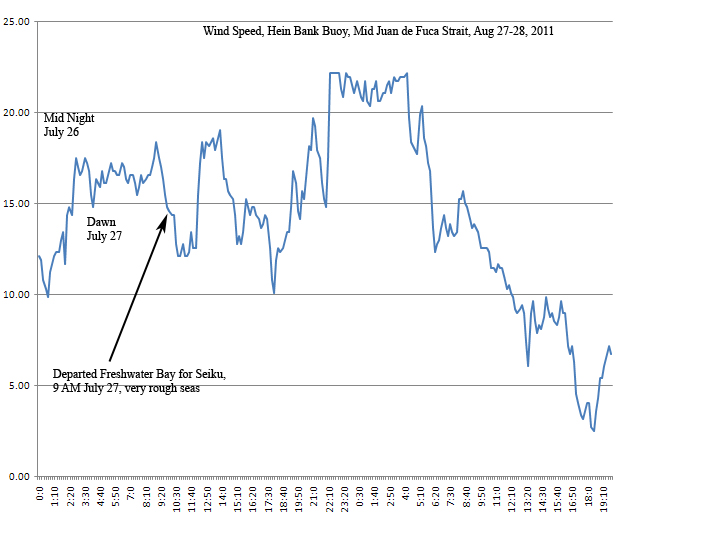 And the tide situation: 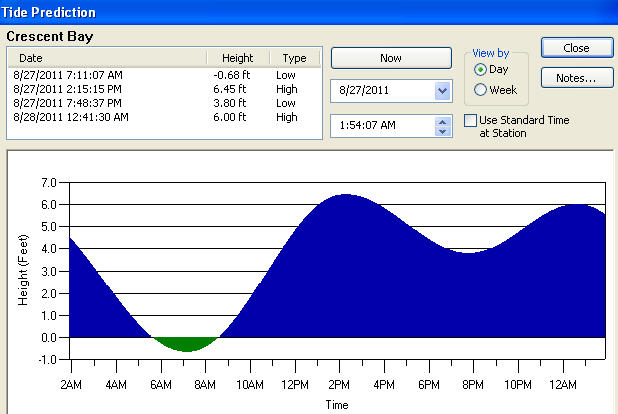 Once again we were facing a significant flood time, but this time the winds in the middle of the strait held steady overnight above 15 Mph and actually built during the morning and early afternoon hours to close to 20 Mph. As we headed west from Freshwater Bay to Crescent Bay, the seas went from a light chop to full-on 3-5 foot pyramid shaped waves, coming from no discernable direction. The winds appeared to be coming more from the north than straight west. We slowed the boat from 20 Mph to about 14 Mph (over ground), and conditions were uncomfortable. Our speed was surprisingly high for the motor’s RPM’s  and the seas. It felt as thought we were going with the current. This persisted for approximately 10 miles, and then the seas went completely flat, at around 10 AM for the next 10 miles. My guess is the current was swirling in the strait, and actually going out strongly, creating large areas of opposing current and strong winds. I understand these are referred to as “overfall” conditions.

Continuing west, as we approached Pillar Point, in the 11:30AM time frame, we saw a repeat of the prior rough stretch, and things went quite nasty. We headed to an area about 4 miles offshore from Seiku, where many boats were fishing. Here the conditions were typical of a strong westerly with a flood tide, bigger swells, more predictable seas, white caps, etc. These conditions were not pleasant, but are easier to deal with than confused seas.

One “bad trip” in approximately 2002, was intended to route us from Sequim to the San Juan Islands. This was before I was aware of the real time buoy data, and/or before it was available. As we were unable to leave in the early AM, and the afternoon westerly’s were in full force, we ran downwind in the late afternoon from Sequim to Port Townsend and overnighted there, planning a daybreak departure in what we hoped would be calm conditions. Well, it blew all night, and as we headed from Port Townsend toward the Northwest, conditions deteriorated, with steep seas increasing as we got 3-5 miles NW of Point Wilson. We turned around on this trip after following a 40 + foot commercial fishing vessel and watching it getting thrown all around.

Another trip we were returning from Roche Harbor to Sequim via the west coast of San Juan Island. As it was calm at Roach and things had been quiet for several days, we left around 10 AM. The westerly’s had kicked into to full gear, and were running straight up Haro strait. My mental note here, was don’t expect shelter from the westerly’s due to Vancouver Island in Haro strait, they may just curve and head north. This was a very long schlogg directly into the seas until mid Strait, where we turned and tacked SE, into Sequim.

On two other trips over and back to the San Juans from Sequim, we had a rough time over Hein bank, with large (>2 mile) stretches of confused steep seas. These were in mid-morning, sometimes with fog, and increasing winds, likely in the 15-20 mph.

In all our many trips out of Neah Bay, we frequently encountered large ocean swells, but invariably these came from the west, southwest, or northwest; there were areas of rip tide, but these areas were typically long and narrow, less than ½ mile in width, and easy to blast through in my boat. Sometimes the wind would pick up out of the west, but usually this was oriented with a big swell resulting in predictable following seas.

What is to learn from all of this? First, beware the Eastern Strait of Juan de Fuca. While much is written about how treacherous the Western entrance is, and this is not to suggest any lack of prudence there, the Eastern Strait in the summer, with its combination of high winds, currents, significant shoal areas, large distances to land, and typically few other small craft, is an area to treat with significant caution.

We have seen large areas of “overfall” conditions in the Eastern Strait. We are not talking about short stretches of defined rips, such as we’ve seen off Dungeness Spit, or in the west entrance near Duncan Rock, we are talking about miles of steep pyramid shaped seas in all directions, which require significant caution.

Second, watch for days when that wind doesn’t die off. The common assumption is the winds calm down at night, and early AM crossings are the way to go. Well, our experience is sometimes, perhaps even 1/3rd of the days in high summer, the winds don’t really subside much. Avoid crossing those days where the winds in the AM are over 15 Mph, especially during periods of high tidal flux. Consult the Hein Bank Buoy data frequently!!

Finally, expect some very nice, flat crossings. While conditions are sometimes bad, there are plenty of days where in a fast boat you could run from Port Townsend or Sequim to Friday Harbor for lunch and back with no problem.

We would love to hear from anyone with significant experience crossing the strait in small craft. We’d love to hear from people who have studied the currents/tides in more depth, (no pun intended!) and understand more about the complex relationship between the tides, currents, shoals  and seas. Most of our trips have been on westerly flood tides with westerly winds, but we’ve still seen major overfalls and tide rips.

Regarding fog, we’ve seen plenty of it. When we are in it we slow down to 14 Mph or less, look around very carefully, and turn up Channel 16.  We don’t use radar. Multiple times we have come close to other craft, large and small, but have never been even close to a collision. One time we have been hailed on Channel 16 by a freighter and told to change course. We did with no issues. Perspectives on fog and radar?

Background information: I am a relatively experienced boater, but nothing like a commercial pilot. I get around in a 21 foot welded aluminum boat with a primary outboard and a trolling motor on an “offshore” bracket. The boat is a heavy duty, Wooldridge “Deep Water” model, weighing 3,500 lbs with 100 gallons of fuel; it sports a fully enclosed pilothouse and deep V hull all the way to the stern. We carry two VHF radios, a marine GPS chartplotter, a 2nd GPS feeding a laptop computer, and an unsinkable lifeboat.

Below a photo of our boat, swinging off a buoy after a pleasant evening in Freshwater Bay. 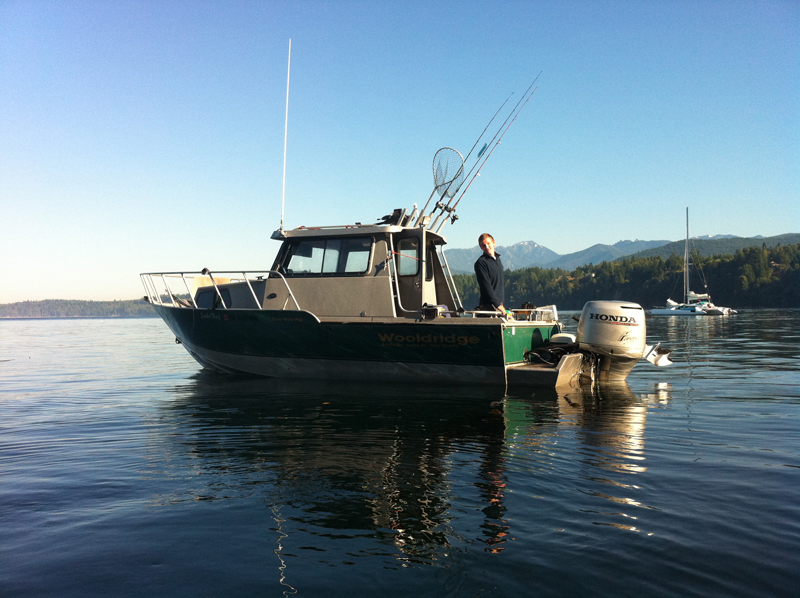 8 Responses to Crossing the Strait of Juan de Fuca