If you live in Seattle you have certainly noticed the distinct lack of sunshine during late May and early June, 2012. From a perspective of rainfall or temperatures this last month (May 15-June 14) may not have been that atypical, but what about sunshine? I looked into the incident solar radiation between May 15 and June 14th to see how many bright sunny days we actually had in Seattle, and whether the rain shadow offered some relief.

Here’s what I found out. In Seattle this spring we had only six bright sunny days in the last month. Furthermore, in the first half of June we have had exactly one bright sunny day. Last year, which was a very cold and grey spring, we managed to have four bright sunny days in the first half of June.  While I don’t have multiple years of data, I do know that we have had a stretch of really dark wet springs, as Scott Sistek of Komo recently reported on. And even when compared to last year, this year was exceptionally dark.

Time to head to the rain shadow!

Here is a summary of bright sunny days in Seattle:

And the summary for Sequim:

This year the olympic rain shadow offered significant relief from the June gloom in Seattle, with double the bright sunny days overall and four times the sunny days in June. Still June was not nearly as bright as last year, and four days out of 14 is not exactly blue bird.

Given how few bright sunny days we actually had in Seattle, it is fairly easy to remember when they occurred during this period. Everyone remembers Friday and Saturday of Memorial Day weekend, the 25th and 26th of May.  That WAS sunny, and I suppose counted double!  Other than that we had three sunny day’s mid-week in mid May, and then only the one bright sunny day in June, which was on Monday June 11th.

This late spring seems quite unusual to me. In terms of total incident sunlight, we are behind last year during this period in Seattle, with only 97% of the recorded total radiation of last year. We have had an active storm cycle with cold storms dropping snow in the mountains above about 4,500 feet frequently. We have had no extended periods of high pressure with back-to-back sunny days. Furthermore, the forecast for this next week, June 18-24 is overcast and stormy for the most part. Let’s hope the last week of June and early July see some changes. If you live in Seattle, get into a rain shadow area, either the NE Olympic peninsula or East of the cascades.

Prologue, as I am writing this mid-day Monday, June 18th the rain shadow is fully cranked up during yet another low pressure frontal passage. 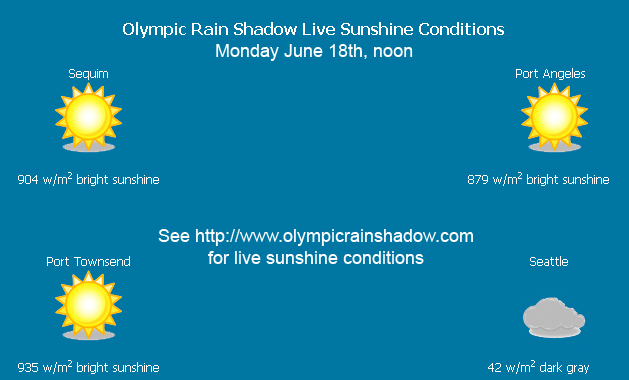 Note, my measurements are based on actually sunlight hitting the ground, whereas the National Weather service data from Seatac is based on sky conditions, so the numbers likely differ slightly, with mine usually being a bit more optimistic. See some of my rain shadow sunshine reports for more data and information about data collection and sunny day calculations.